In pure (real) math, every decimal has an equivalent binary. In floating-point math, this is just not true! Consider the following example, let:
double d = 0.1;
float f = 0.1;
, should the expression f > d return true or false? Let’s analyze the answer to this question during the remaining part of this article.
Many new programmers become aware of binary floating-point after seeing their programs give odd results:
“Why does my program print 0.10000000000000001 when I enter 0.1?”
“Why does 0.3 + 0.6 = 0.89999999999999991?”
“Why does 6 * 0.1 not equal 0.6?”
Questions like these are asked every day, on online forums like stackoverflow.com.
The answer is that most decimals have infinite representations in binary. Take 0.1 for example. It’s one of the simplest decimals you can think of, and yet it looks so complicated in binary: 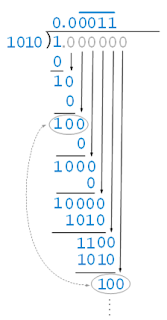 Computing One-Tenth In Binary - Photo by [2]

The division process would repeat forever because 100 re-appear as the working portion of the dividend. Recognizing this, we can abort the division and write the answer in repeating bicimal notation, as 0.00011.

, which is greater than both of the exact value and the more precise approximation at 53 digits.
So, yes 0.1 float is greater than 0.1 double. This expression returns true!

Thanks for sharing such a helpful, and understandable blog. I really enjoyed reading it.